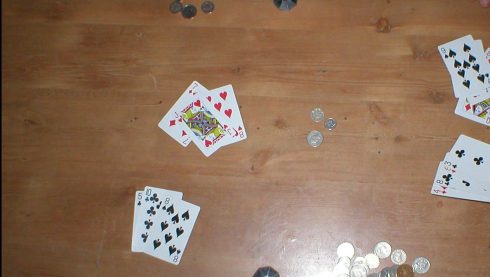 Three Parts (Black)
after Lauren Bullock
I.
My father is one half Chippewa, which means his mother was Black and his father was invisible. You can see it in the way he begins to fade from view when the dusk settles in on the boy raised hills. First the nose vanishes, then the ears and most of his torso until only the night can identify his hands. But when the sun is up, his skin is a slow cackle of flame. Snap your fingers hard enough and the cheeks of my father will appear. Black boy sunspot. Loves the dirt. Fears being lowered into it. Hated his father. Called him iridescent. Called him mean little Indian. Black boy married a woman twice as dark as him.
II.
Bird-chest son calls himself ¼ Native. Son brag about having Indian in his blood. Puffs out his chest like he done survived somethin’. Son can’t name a tribe. Son still thinks Bugs Bunny is funny. Son is 10 years old and rises with the god-rays. Son is still ¼ on first day of class. Still don’t know what genocide means. Ain’t nobody explain erasure. Still don’t know what his grandfather’s real name was. Son stole once and felt bad. Son had something taken from him and watched the teacher not care. Son is ¼ Native. Son gets called a nigger on the playground and forgets fractions. Son is ¼ I don’t remember. Son learns to walk on his phantom limbs. Son is so Black now. Son so Black the sun shrugs. Son so Black his father can’t forget him.
III.
The not yet naked girl stares at my naked hue and asks which one of my parents is Native American. She says she can tell by how my red skin pushes through the shadows of the room but I always thought the red came from anger. From the blood I could never get out of my skin. From the rage. Or fire I haven’t figured out how to control yet. Never knew why I drink so much water and sweat curses. Never knew why I count things that burn to go to sleep. Never knew why a woman’s touch on my neck felt like flint striking. Why my Black no longer has a volume knob. Ask me if I know how much Native I got in my blood and I’ll tell you I tested out of math. Ask me the history of my father and I’ll tell you half the story. I am the monolith or I am almost the monolith or I am swallowed under the weight of its black. If her eyes adjust to the dark, will she forget about the blood orange my chest is wrapped in?
IV.
Boy, whose child is that? That your daughter lookin’ so light? Your daughter so light she gentrified the nursery? She so light look like she stole somethin’ and didn’t get caught. She so light her black got stretch marks. How you get a child that light, anyway? Ain’t your wife darker than you? You know you married a woman same shade as your momma, right? Like half-father, like quarter-son, I guess. Your daughter light enough to have been here before. Ain’t your daddy mixed with somethin’ else? Ain’t he Black and somethin’ else? What that make you, huh? You got any room for tradition in them bones? Where you get that child from boy? I seen your momma, she Black as oppression, I know she ain’t wash up from that side of the river. You and that daughter got eyelashes long as crows feathers. Must have gotten that from her daddy’s daddy’s daddy. You even know what his name really was? You even know why he tried to disappear your namesake? Your wife dark enough to sing blue notes. Where you get that girl from, huh? How she get so light? What you hiding boy? What you too ashamed to tell us?

The summer I graduated
to the grown folks table
was the summer when Big Roy
tried to punk me in front of LaShaun and
I swung my fist through his slick shit spitter
till I could hear his family move off the block
the following year. Now, I’m playing Tonk
in a swamp of cigarette smoke because Uncle
tells every person that walks in the room,
you see my nephew knock that nigga out,
and grips my shoulder like a crane clumsily trying
rip down a foundation while I try to forget Big Roy’s
teeth leave the orbit of his face. But my cousin
can’t sit with us yet, even though he’s twice my size. “Unc”
say he too soft for this grown shit, so the next
week my cousin takes the first fat joke from some
no neck junior and hits him so hard, that junior graduates
a year after us. Cousin never spoke much after that
or maybe it just seems that way because
the phones in prison be real choppy
or maybe that’s just what the rumors are
because I was too much of a coward
to visit him there.

After 2nd period, they gathered us
together like regrets to tell us J.R.
was found by the old tire depot and
the student body was so shocked we all

wondered if they were still serving pizza
at lunch. We didn’t ask any questions about
J.R. or what jersey he rocked to his rubble deathbed
but someone says something about skipping

the next class and I’m with it, cause that’s world-
history and I’ve had my fill of kneeling into a text
where I don’t show up until the end,
but really I need time to tell my best friend how the girl

in high school that used to babysit him,
told me to come inside the house while her
mom was at work barely making enough to pay
for it. She didn’t take her bra off, but instead curved

her fingernail around my bony ribs
as if she were peeling the freshly picked orange she
did not pay for and once our underwear
became orphans at the bottom of the bed,

she told me I would be a man today and I think
she meant that I was now the bullet that she had wrought
and all I need is to beg where to be aimed at. Her fingers
poke belief into the back of my head until she has shoved

herself into my mouth like a shotgun. Somewhere, J.R. sees
the hunting knife before it takes his last name
and wishes to see his mom again. The hallways at school
forget his scent but can smell a woman on my skin

who is too old to attend here.
I come home to a loud and empty
apartment and remember the way that J.R. wasn’t
a very good baseball player

but at least he was another black baseball player
and I might have cried about never seeing him again
like I did when they found another boy last
month, but so much has changed since then.

William Evans is a writer from Columbus, Ohio. He is the founder of Blacknerdproblems.com and author of 2 collections of poetry on Penmanship Books. END_OF_DOCUMENT_TOKEN_TO_BE_REPLACED
This entry was posted on Tuesday, July 12th, 2016 at 4:03 am and posted in Poetry. You can follow any responses to this entry through the RSS 2.0 feed.
« BOOK REVIEW: “Mouthy” – Emily Rose Kahn-Sheahan (Thoughtcrime Press)
Still Life #79 »